The Power of The Strike

American University staffers stuck together, and a transformative sense of community took hold. 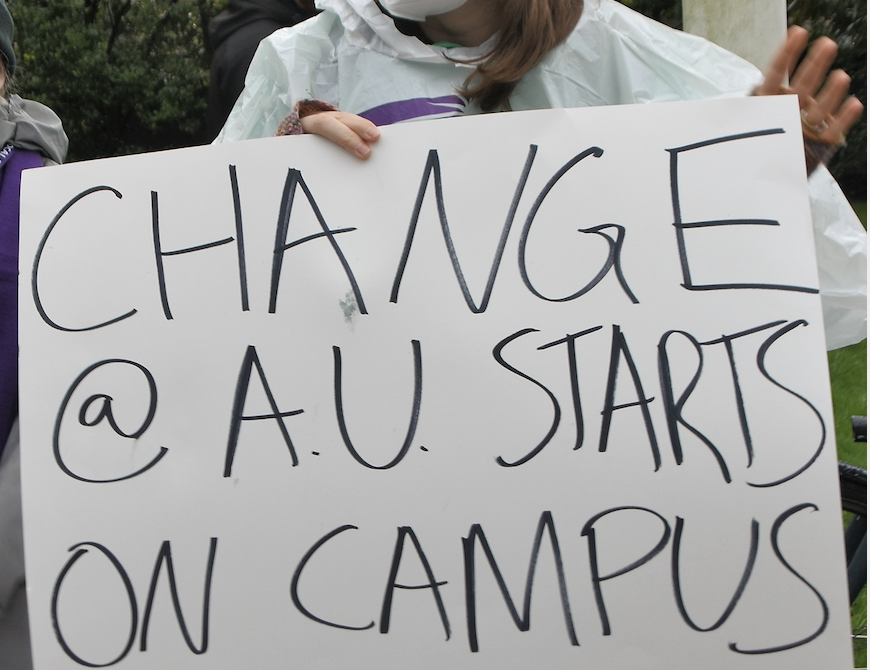 What better way for adjunct professors and university staffers to teach activism in the nation’s capitol — to show the real-life benefits of organizing, collectively speaking out, and demanding change — than to model it. 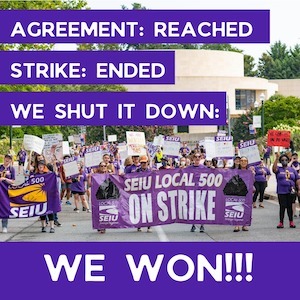 Two years after having joined together in union with SEIU Local 500, American University staffers were still without their first union contract due to the university's bad faith bargaining. But with a 91% vote in favor of exercising their right to strike, the AU Staff Union took a collective breath and went for it, striking for what turned out to be a full week amidst incoming freshmen moving onto campus.

Hundreds of those students even left their own welcoming ceremony to join the picket line, after hearing about the staffers’ low pay and disrespectful working conditions. The result of all the campus solidarity — among the union members themselves, their non-bargaining colleagues, and the students — was an actual written agreement.  Reached quickly.  No More Delay Tactics.

In the workers' own words:

"Going on strike to win our first contract was one of the most difficult things I've ever done, but the protections and improvements to our working conditions at American University that are enshrined in that document would not have been possible any other way, and they make the struggle more than worth it.  Just as important as the contract, however, the united community of staff that emerged from the strike, willing to support and fight for each other, has made AU a better place to work and makes a solid foundation for even bigger wins in the future."

“Going from largely remote organizing to a strike was one of the most incredible journeys I've been on. It's been so invigorating to see our numbers grow from a handful of organizers to a community of hundreds, and to see new colleagues step up into leadership roles. Seeing our students and faculty come out in support was also very validating, and we could not have won without that support. Getting to this point has taken a ton of work, but it's been worth it, especially knowing that we've made changes that will benefit our colleagues for the future, like increases for longevity. The university has extended the economic benefits we negotiated to staff outside bargaining units, and I'm thrilled that non-bargaining unit staff will see these changes, too."

“Aside from economics, one thing that has driven this union campaign all the way back from new organizing was the need to have a say in how our workplace was governed. Over and over again we saw the consequences for both the staff and the university community of decisions being made by Directors and VPs and Deans without any REAL input from the people on the front lines. We saw this during COVID decision-making, and we have seen its consequences in high turnover and struggles to retain students. Knowing that by coming together and fighting together and building community together we have forced the powers that be to listen and act on our demands is incredible. We've built the power and the connection and the capacity as a group to defend our community. A union is only as strong as the unity and community between the members, the organizational capacity to organize action. That community and ability to act together, even more than the pay raises and contract protections is what we won in this strike and we will only get stronger from here as we build our unit structure and continue to engage our broader AU community.“