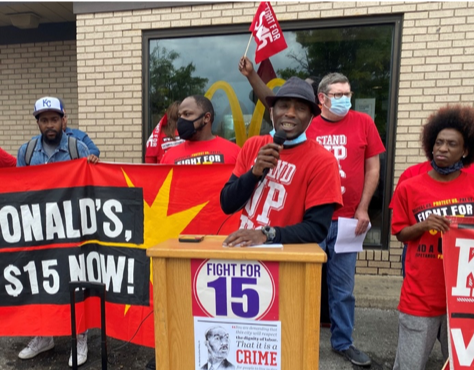 McDonald’s cooks and cashiers in 16 cities went on strike Wednesday, the day before the company’s annual shareholder meeting, to demand the burger giant pay every worker across the McDonald’s system a living wage of at least $15 an hour.

“...You are doing exactly what you need to do to not only raise wages and create dignified work for yourselves,” Ocasio-Cortez said to strikers during a lunchtime virtual strike line. “Frankly you’re doing this for the entire industry. You’re inspiring workers across the country that work in the general fast food and greater hospitality industry at large to realize you deserve better...Keep doing it. Keep pushing. We’re going to keep going until not only we get a $15 minimum wage, but we’re going to keep going until you get a union.”

“Tomorrow there will be the shareholders meeting where a bunch of millionaires come together to discuss how they’ll distribute their profits. We’re here to let you know today, McDonald’s we ARE your profits,” McDonald’s worker Nahshon Blount told workers on the strike line in Durham. “We’re the ones who make the burgers, the fries and everything inside the store...so why are you paying us poverty wages?”