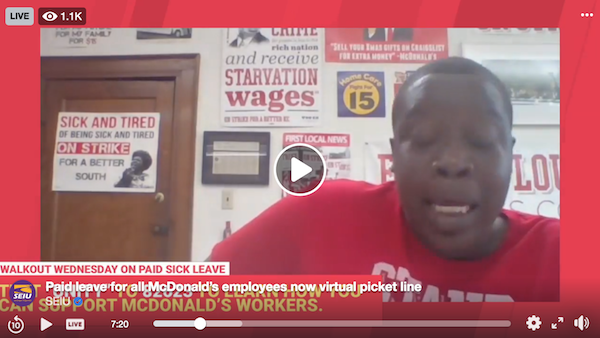 This week’s Walkout Wednesday featured a virtual picket line of fast food workers from around the country, walking off the job in the midst of COVID-19 for paid sick and family leave.

In addition to paid leave, workers in McDonald's locations worldwide are demanding that McDonald’s work collaboratively with them to create a plan to stamp out sexual harassment. On Monday, labor unions representing millions from around the world filed a complaint against McDonald's over rampant sexual harassment in its stores. Too many McDonald's workers have suffered harassment only to be met with management indifference and retaliation.

SEIU President Mary Kay Henry and Rev. Dr. William Barber joined workers like Sade Andrews, a McDonald’s worker in Tampa, whose store has been unable to provide its workers with PPE for entire weeks. Sade went on strike on May 6th and will continue working with co-workers to demand safe workplaces and better pay, despite the state of Florida reopening.

Darnell Harris, a McDonald’s worker in his native Detroit, pointed out the existing health disparities in his city—how non-whites in general and Black folks in particular are at higher risk for conditions like cardiovascular disease and diabetes—as well as healthcare access disparities.

Maurilia Arellanes, who in her 22 years working for McDonald’s in the Bay Area, told of witnessing and experiencing firsthand the pressures on workers to make their shifts no matter what. No matter if they’re sick, no matter that they're all working in the food service industry!

Text UNITY to 82623 to learn how you can support McDonald’s workers.