Fighting for His Union

With a Master of Divinity from Columbia Theological Seminary and a Master of Arts and PhD from Vanderbilt University, 43-year-old Josh Braley has been teaching world religion as an adjunct professor at Santa Fe College in Gainesville, FL for the past 15 years. He also works 20 hours a week as a Presbyterian pastor. 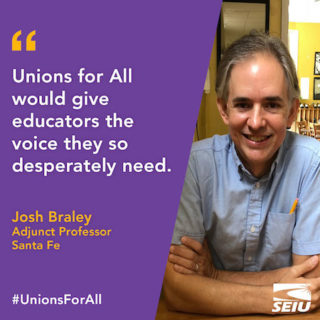 Although adjunct professors make up 60% of the faculty at Santa Fe College, they have little voice in running the college with only three non-voting representatives on the College Senate.

“Right here on campus, we have adjuncts on food stamps, adjuncts who cannot buy gas to get to their classes, adjuncts who would literally be homeless if not for the help of Catholic Charities and St. Vincent de Paul,” he explains.

“The adjuncts who can pay their bills are usually the ones who teach at one, two, three, or even four other colleges. That’s why we need #UnionsforAll.”

In addition to higher wages, Josh and his colleagues are fighting for respect and dignity at work. When Santa Fe College won the Aspen Prize and $800,000 from the Aspen Institute in 2015, full-time employees received a $1,000 bonus and a phone call thanking them. Adjunct professors got free t-shirts.

“As matters stand, [Santa Fe College] adjuncts are isolated individuals. We rush onto campus to teach our classes, then rush back to our cars (or to the bus stop) to get to our second, or third workplace. We do not stand out, or speak out, together,” Josh says. “A union will give [Santa Fe College] adjuncts a way to communicate with each other on the one hand, and with our administrators, trustees and legislators on the other hand.”

It’s time to embrace a new future in which anyone who wants to join a union in their workplace can, no exceptions. We need the next President of the United States to fight alongside us and make it easier for working people to come together in unions.

Join us and DEMAND #UnionsForAll!