Trump Labor Board to reconsider graduate workers’ right to a union

The National Labor Relations Board under Trump has announced that this September it’ll revisit its 2016 ruling that classified graduate workers as employees, predictably opening the door to classifying them solely as students—who’ll then have no legal right to join together in a union, or even keep the union they have. 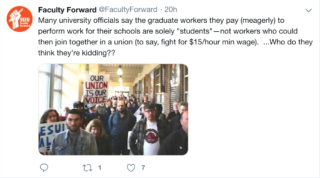 Since 2016, thousands of graduate workers at colleges nationwide have joined together in unions, negotiated collective bargaining agreements with their university employers, and made significant improvements to their abysmal pay and poor working conditions.

But especially if grad workers are no longer deemed to be employees, and collective bargaining is no longer a requirement for universities, the workers promise that both alternative organizing such as ‘direct join’ models and collective actions such as sit-ins will continue—and will continue to win.

At Duke University, grad workers who organized their union in a ‘direct join’ model won a $15/hour minimum wage equivalent.

“I understand the Trump NLRB is seeking to undermine worker power, but the fact is we’re always going to organize to demand better working conditions. The question is, are we going to make those demands at the bargaining table, or through collective action? ...Worker power has never just been about bargaining,” said Jess Issacharoff, a recent Duke doctoral candidate in literature and an SEIU Faculty Forward member.

Graduate workers at Loyola University Chicago, Washington University, and Marquette University recently led protests on their campuses to raise awareness of their labor and show why they are workers. A wave of similar actions has grown on campuses across the country as the corporatization of higher education continues to disenfranchise the very workers that make the institutions run.

Regardless of the situation at each institution, there’s one constant: the workers getting paid to do much of the research, teaching, and grading are the master’s and PhD graduate workers who are employed workers, not solely students.

As for that ‘solely-students’ argument, Caitlin Schroering, a fourth-year Ph.D. candidate in the sociology department at the University of Pittsburgh, says, “It's incredibly frustrating for me, and it's disheartening, because what it says to me is [that] they don't value the work that I do for this university—and it is work.”