Spreading message that every worker — White, black and brown — deserves a seat at the table, and a voice in our economy and democracy through a union

Florida SEIU members were joined by fast food workers involved in the Fight for $15 and a Union as they marched and rallied outside the venue for the two-night Democratic Presidential debate in Miami.  After the rallies, members and their allies gathered for watch parties in Miami, West Palm Beach, Orlando and St. Petersburg where they listened to the candidates’ plans, and texted and phoned friends and family members, urging them to register to vote for the 2020 elections. They were joined by SEIU members who held watch parties from coast to coast.

SEIU members across the country have been determined to make the right to join together in a union a central issue during the 2020 primary, and are demanding that the Democratic candidates join them on picket lines and publicly state that if elected they will do everything in their power to make it easier for working men and women to join unions.  Their voices were recognized at the very beginning of the first night, when Washington Governor Jay Inslee said on stage during the debate, “I’m proud to stand up for unions. I’ve got a plan to reinvigorate collective bargaining so we can increase wages. I’ve marched with the SEIU folks, and it’s not right that the CEO of McDonald’s makes 2,100 times the amount of these people [working] at McDonald’s.”

On the day of the second debate, SEIU International President Mary Kay Henry and SEIU Local 1199 Florida member Raquel Hanshaw appeared on ABC News’ The Briefing Room to discuss raising the minimum wage and getting workers a seat at the table by having the ability to form unions.

SEIU members and fast food workers will accelerate their efforts throughout the entire primary season, as they spread their growing message that economic justice and racial justice go hand in hand, and that every worker — White, black and brown — deserves a seat at the table and a voice in our economy and democracy through a union. 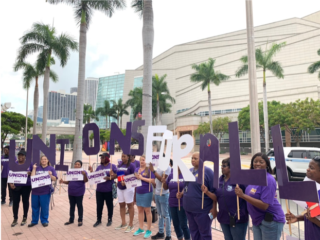