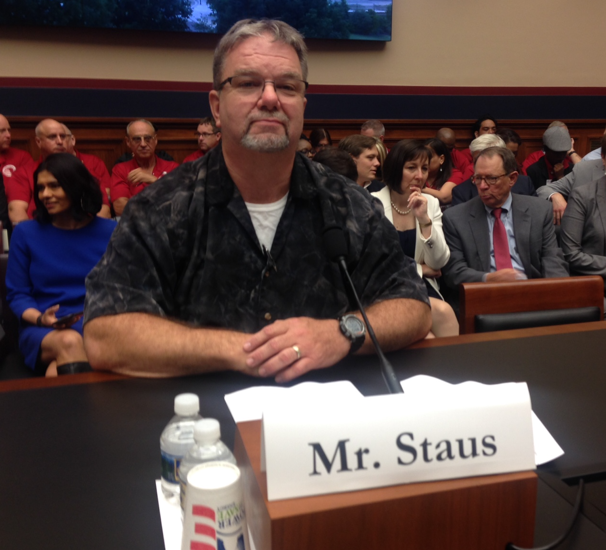 The call for federal lawmakers to make it easier for more working people to join unions grew louder last week as Jim Staus, a day porter from Pittsburgh, Pa, testified on Capitol Hill at a House Education and Labor Committee hearing on the Protecting the Right to Organize Act (PRO) of 2019. The PRO Act, introduced on May 2, would strengthen protections for workers’ right to organize a union and bargain for higher wages, better benefits and safer working conditions.

During the hearing, Staus shared his story of being illegally terminated by the University of Pittsburgh Medical Center (UPMC) after he and his co-workers tried to form a union with SEIU.

“In 2012, UPMC workers began to talk about forming their union. I wanted in. In Pittsburgh, everyone knows the union turned dangerous, low-paying steel jobs into middle class jobs.  If workers came together, I knew that I could make a better future for my wife Cindy, daughter Hannah and my coworkers too. But instead of respecting our right to organize to make our hospital better, UPMC launched a fierce anti-union campaign,” said Staus. “Sadly, my story is not unique. Working people are supposed to have union rights, but we have to risk everything to exercise them.  We need new laws like the PRO Act to hold companies accountable to make it easier for people to join unions.