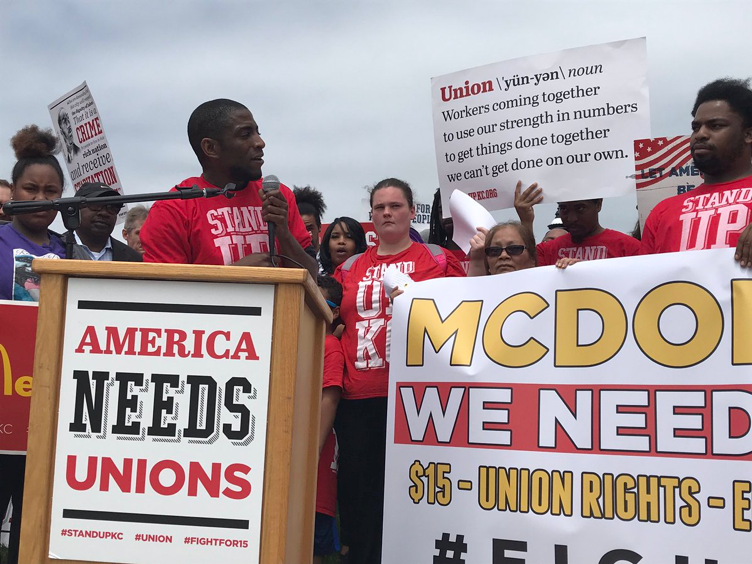 Presidential candidates–including Bernie Sanders, Bill De Blasio, Julián Castro and Jay Inslee–joined McDonald’s workers in the Fight for $15 and a Union who are demanding the end of sexual harassment on the job and the right to a union in strikes across the country. The strikes coincided with the fast-food giant’s annual shareholder meeting. These actions marked the launch of Fight for $15 2020, a worker-led effort to push candidates to embrace unions as the best way to tackle inequality and fight racism. The initiative will seek to make the need to put more workers in unions a defining issue of the 2020 campaign, in much the way workers in the Fight for $15 and a Union made a $15 minimum wage a flashpoint in the 2016 race for the White House.

“Across the country, McDonald’s workers face not just low pay, but sexual harassment and violent attacks,” said Rita Blalock, a Raleigh, N.C. McDonald’s worker who is paid just $8.50 after nine years on the job. “When we come together to demand union rights to address those issues, McDonald’s fights us every step of the way. But the best way for us to make our jobs better is by joining together and demanding the right to a union. That’s why we’re striking, so McDonald’s and its shareholders hear us loud and clear—we won’t stop until we win union rights.”

· See photos, video and press coverage of the strikes here