Hundreds of SEIU members traveled to Las Vegas on Saturday to directly ask six current and former elected officials what they specifically intend to do to address the fact that a majority of Americans—of all races—are overworked, underpaid and struggling to provide for their families.

Saturday’s forum was one in a long series of actions and events where working people are demanding leaders put forward a bold plan to unrig our economy and make it easier for working people to join unions. Having a concrete plan to do so is one of the requirements SEIU members are making presidential candidates fulfill during the 2020 election cycle.

“Every two weeks I take home just $514 in my paycheck. My rent is $408 a month and I have to rely on Medicaid and food stamps just to survive. Meanwhile, McDonald's makes over $5 billion a year. What will you do to get them to create union jobs like they have in other countries, instead of continuing to duck their responsibility to workers like me and exploit our communities to pad their bottom line,” Milwaukee fast-food worker and Fight for $15 and a Union activist Jennifer Berry asked Senator Kamala Harris.

“I would call [the CEO] up and say we need to talk,” responded Harris.  “You can’t promote yourself as being one of the country’s oldest businesses that symbolically represents who we are as Americans, but not reflect American values that say if you work hard you should have dignity and should be able to pay your bills.”

Members also questioned the candidates on other issues that have to be addressed to move power back to working people, including healthcare, climate change and immigration reform.

“I came here 22 years ago from Honduras to escape violence in that country. I was threatened by my employer for trying to organize a union. I was able to escape, but others were killed,” said Maryland janitor and 32BJ SEIU member Miriam Pineda to Senator Amy Klobuchar. “This is my country, and 32BJ SEIU is my family. What will you do to permanently help people like me who came to the US after fleeing violence and are worried about our ability to stay here?” 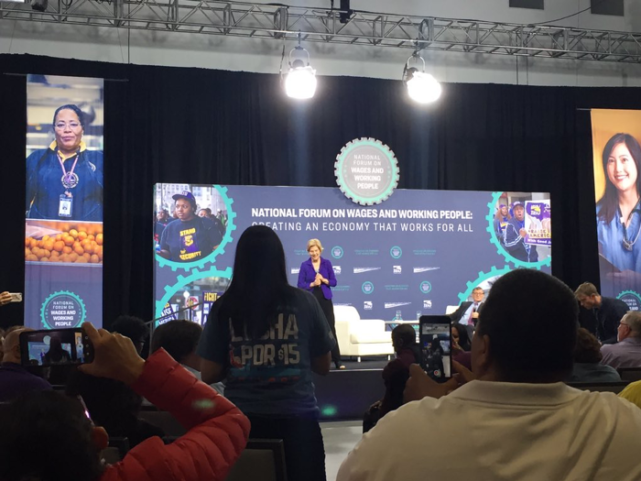