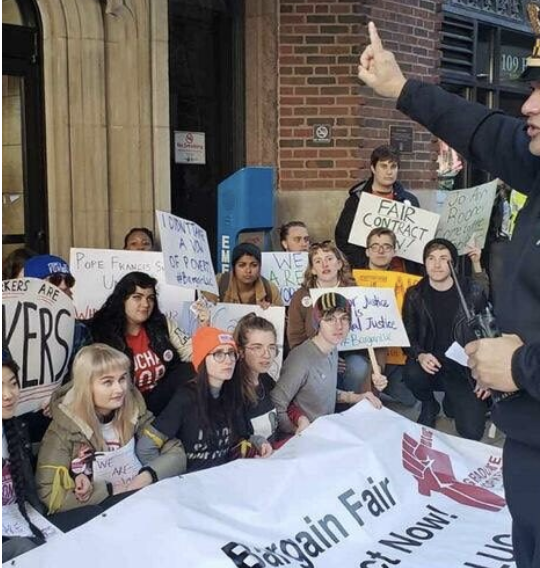 Graduate workers from Loyola University Chicago announced a walkout at a sit-in where seven Loyola graduate workers and their undergraduate student supporters were arrested Monday, peacefully protesting the school’s refusal to negotiate a fair union contract.

“If Loyola administrators thought today’s arrests would intimidate us, they were wrong. Their actions leave us no other choice. The prospect of facing more weeks, months, semesters constantly worried about making ends meet intimidates us more than taking arrest. If this is what it takes to get a contract, so be it,” said Yiran Zhang, a doctorate candidate in philosophy.

Liza Distefano, a doctorate candidate in psychology, gave a heartfelt account about her struggles as a graduate worker. “In my last three years at Loyola, I have doubled my debt from undergrad, accumulating over $35,000 in student loan and credit card debt in graduate school alone trying to get my basic needs met where my paycheck and health insurance falls short. With three years still left in the program, I can’t wait another two years for a contract!”

Graduate workers at Loyola joined together back in 2017 to build the Loyola University Chicago Graduate Workers Union with SEIU Local 73.  Their union is a part of a larger movement among graduate workers and non-tenure track faculty at colleges and universities nationwide, who are joining together for a voice and demanding union rights to raise work standards, improve wages and benefits, establish job security and restore respect for their professions.  At the neighboring University of Illinois Chicago, graduate workers just concluded a two-week strike, reaching a tentative agreement with the administration that includes pay increases, less expensive health care and other wins.

Stay tuned as graduate workers prepare to walk out April 24.