Black History is America’s History and it goes on 365 days a year.

My name is Lowell Williams. I teach in the Theater Department (introduction to acting and theater appreciation) at Miami Dade College. In my theater appreciation class, I teach that theater has two main functions, i.e, to entertain and to enlighten. At the assassination of MLK, I decided to pursue theater because of its function to enlighten. I asked myself “what can I do” when I was reeling from the reality of Rev. King’s death. I decided I wanted to use theater as a means of stimulating people to think and do some introspection into their racial attitudes and behaviors as we all have to interact. White Americans weren’t going anywhere nor were Black Americans. 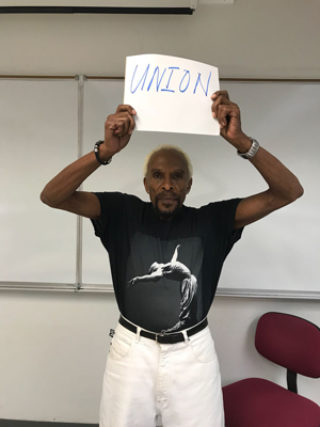 As we celebrate Black History Month some 51 years after the assignation, for all the “supposed” progress made in race relations, we are more divided than ever, not just along racial lines, but those of gender, religion, sexual orientation, and countries of origin. We all still need to be enlightened. Arts and theater in particular are still valid and necessary.

When there are budget cuts to be made in education, the arts are the first to go. Currently, at Miami Dade College, where I teach I have to fight to have an adequate room in which to teach acting. Additionally, I am no longer allowed to direct any of our productions because the college has gone to a business model. I can’t be paid both under an academic pay line and as an independent contractor, the line for paying directors of our colleges productions. Additionally, with the same or more advanced credentials and experience, I’m paid less for teaching the same courses as “full time” professors. I need a union to represent my interest and by nexus the interest of my theater students who are in effect, being shortchanged by the very institution that supposedly has their educational interest as their priority. In essence the fight to unionize adjunct professors is a fight for the interest and dignity of our students as well. Black History is America’s History and it goes on 365 days a year.

Yours in the struggle,
Lowell Williams

SEIU members are committed to fighting against racial and economic injustice. We’re working to end structural and anti-Black racism so we can have an economy that works for everyone. Join us.