The Year of the Worker: Ayde Jaime’s Story

Meet the working people who are changing their workplaces and our country.

Along with record levels of inequality came an unprecedented and powerful response from working people. Throughout 2019, from nurses and fast food workers to factory workers and school employees, we demanded better working conditions and our right to a voice through a union. We rallied, protested, marched and even went on strike to fight for good jobs and the better futures our families deserve.

And those actions resulted in big wins. Together, we’re reshaping our country and demanding a fix for the rigged economy. That’s why we’re celebrating 2019 as the year of the worker. Check out some of the top victories working people have won by coming together to demand better this year. 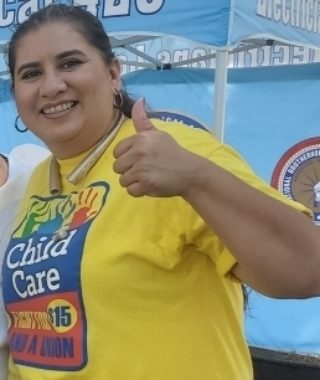 The Worker: Ayde Jaime, Family Child Care Provider
What She Won: In October, after a 16-year-long fight, 40,000 family child care providers in California won the legal right to join together in a union. They will now have the chance to have a strong voice at work and bargain with their employer, the state of California, for better wages, benefits, access to affordable training and more.

They did this by rallying, holding actions, knocking on doors and electing officials who would stand with them for change, such as CA Governor Gavin Newsom who signed into law the bill giving them the right to form their union. Most importantly, they did this by never giving up.

“I know a lot of providers that have been in the field for many years,” said Ayde Jaime, a family child care provider. “…[T]here is so much we can do together.”