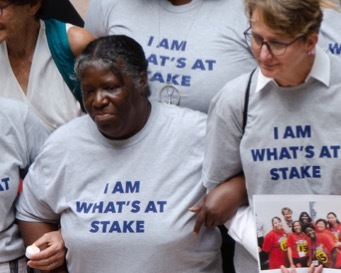 SEIU members know that Brett Kavanaugh would turn the Supreme Court into a weapon against working people, and into a venue just for the wealthy and powerful. That’s why four of them traveled to Washington, DC. to take their messages directly to their U.S. senators.

Elinor Simmons, a home care worker and SEIU HCMIIK member from St. Louis, worries about the effect that Kavanaugh would have our healthcare - specifically the return to the times when insurance companies could deny people coverage or charge them exorbitant amounts because of preexisting conditions.  “I didn’t have healthcare until five years ago when I was diagnosed with stage three endometrial cancer,” says Simmons. “Even though I’m healed and doing fine now, if the Senate confirms Brett Kavanaugh, insurance companies could use that as an excuse to deny me care.

Other members who have traveled to the nation’s capital include Gage Ledbetter and Brooke Larson, two Faculty Forward members from the University of Iowa, and Mirna Blanco, a janitor from Houston and SEIU Texas member.