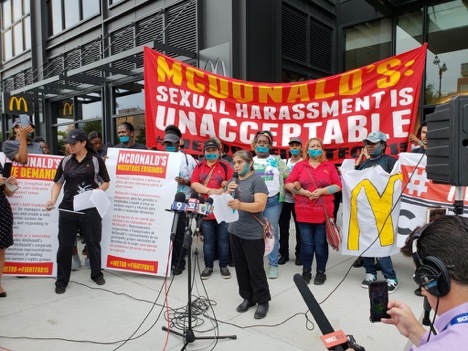 In a St. Louis suburb, they chanted, ‘Hold your burgers, hold your fries. Keep your hands off my thighs.’ In Chicago, they had blue duct tape that said ‘MeToo’ covering their mouths. And in Kansas City, Mo., they held signs bearing the same anti-sexual harassment hashtag with the first letter styled to look like the McDonald’s golden arches,” reports the New York Times.

On Tuesday in ten cities across the country, brave fast-food workers in the Fight for $15 and a union went on strike and took to the streets to protest sexual harassment and abuse they’ve experienced on the job —  including groping, lewd comments, and propositions for sex by management. Backed by the TIME’S UP Legal Defense Fund, 10 cooks and cashiers filed complaints against McDonald’s with the EEOC earlier this year.

“We’ve seen in the news that sexual harassment is happening to others at major corporations like CBS, and now Hollywood actresses have filed lawsuits against their CEOs and media moguls,” Chicago McDonald’s worker Adriana Alvarez told the Washington Post. “Now, more than ever, it is imperative that fast food workers take action and use our voices in the same way — to hold McDonald’s and other fast food chains accountable. The public does not know what we go through behind the counters, the cash registers, even in the bathrooms, the janitor’s closets. But today, the world will find out more.”

USA Today’s editorial board weighed in on the strikes, declaring “this [#MeToo] moment should not be allowed to fade without changing workplaces from the bottom up.” Vox’s Alex Press wrote “the McDonald’s strike isn’t just one more #MeToo story. Rather, it shows the early stages of what it takes to reduce sexual harassment and ensure there are consequences for perpetrators. The issue cannot be fixed from on high; it cannot be won by appeals to the morality of employers, and certainly not to perpetrators. […] It takes building collective power, not just individual empowerment.”

Tuesday’s strikers are demanding a union to help ensure a safe workplace and the creation of a special committee of McDonald’s workers, company leaders, and allies to address sexual harassment issues at the company and hold the company accountable to ensure a safe and dignified workplace for everyone.