The United State of Women (USOW) annual meeting in Los Angeles shows that together, we are powerful, strong, and committed to win real change.

Last weekend, I had the honor of speaking at a brunch during the United State of Women annual meeting in Los Angeles. I was on a USOW panel in DC in 2016 and I was so moved. When I left DC, I made sure I was signed up so I could still be part of the incredible group of women with the USOW. I was so excited to be able to speak again. 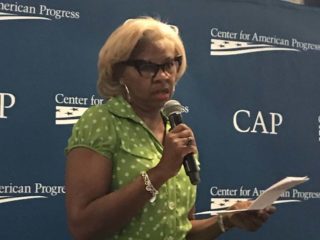 And the experience did not let me down and left me with an even greater sense of motivation. When women come together and organize, we are powerful and we are phenomenal. Every woman in that room was connected and was focused on uplifting each other.

"One of the most powerful things I walked away with, what really moved me was this: It's more than just having a seat at the table. A lot of women who get a seat, get intimidated and are afraid to speak up for what they know is right. At the end of the day you are not at the table to be quiet, you are there to speak up. We have to  shake things up and not be scared."

These are exciting times for child care workers. In California, by working together, we have accomplished so much in the last several years and have optimism for the future.

However, our work is far from over. We have other hills to climb. Did you know that my fellow child care workers and I have been fighting for our union for 13 years? We have marched in the streets, made our voices heard in front of political leaders and in the press, and given everything we have to demand union rights. We’ve worked so hard to pass collective bargaining legislation six times only to have it vetoed by male governors who didn’t think we should have a say in our profession and that we should wait in line. Over 95% of child care workers are women. I’m tired of our voices being silenced.

Well, we are tired of waiting and being taken advantage of. Our time is now.

Why are we in this fight? The American Dream seems like it is fading into the rearview mirror never to return. There are currently over 65,000 family child care providers in this state and many live in poverty. Nearly half of child care workers in California rely on some form of public assistance program; I’ve known women that have been forced to live in their cars or go to the food bank because their refrigerators are empty with no hope of filling them.

Family child care providers have no benefits, no sick pay, and no pension. We cannot sweep this under the rug because it is our reality.

As a result of these conditions, more and more child care teachers are forced out of the profession they love. It’s just wrong.

No one who works hard caring for children should live in poverty or worry about their future—PERIOD.

"Our work has always been undervalued and underpaid. How can we fix it? The only way to fix it is by winning collective bargaining so we can have a strong union."

What’s next for us?

Right now, people, young and old, are taking to the streets in record numbers. Between the Women’s March in early 2017, mass protests to protect the Affordable Care Act (ACA), thousands speaking out against gun violence in our schools, and the most recent teacher strikes in West Virginia, Oklahoma, and Arizona—people are demanding change.

You can look no farther than Alameda County to see our determination in action. Measure A—a proposed ballot initiative to raise $140 million dollars to improve child care and early learning, and ensure that parents and early educators have a voice in the decisions that impact them—is up for a vote in early June. If passed, this measure will have a profound effect on child care workers and families in the county by increasing investment in early learning to improve access to care, raising pay to at least $15 an hour for workers, and making it easier for workers to have a voice on the job.

I hope you will stand with me to demand that all women are able to have a voice on the job to raise their wages and care for their families. Uniting in a union is the only way we will have the power to build an inclusive economy for child care providers and all working women across California.

Check out my full speech at the USOW event

Let decision makers know that providers are not alone in their fight to win collective bargaining and a union, sign our petition today.

Visit americaneedsunions.org and take the Union challenge and show your support for strong unions.