Voters refuse to be divided by hate; turn out for bold, progressive agenda 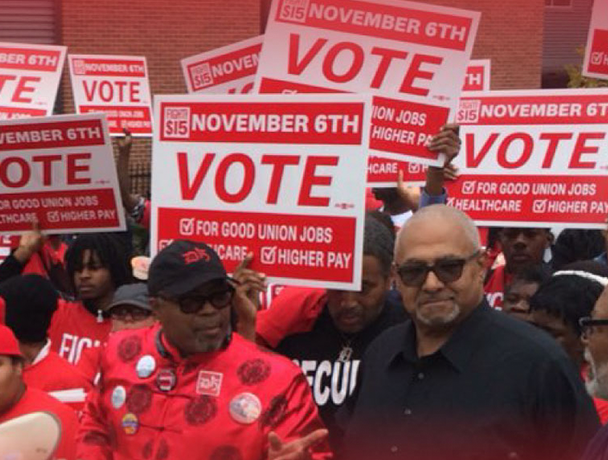 With elections across the country largely decided, it is clear that the work done by SEIU members and Fight for $15 activists to turn out infrequent voters—Black, Latinx, AAPI and women—in support of candidates who vowed to fight for policies like $15 an hour, a union no matter where you work, and affordable healthcare made the difference in races up and down the ballot. Motivated by a bold, progressive agenda, these voters, many of whom were not motivated to vote in previous elections, came out in record numbers.

“The key to this election was people who don’t always vote in midterms—Black, Latinx, Asian Pacific Islander voters—turning out to say no to hatred and yes to a bold, progressive agenda,” said SEIU International President Mary Kay Henry. “Voters sent a crystal clear message: we want at least $15 an hour for every working person, accessible healthcare for every family, dignity for immigrants and refugees, and the opportunity to join in union, no matter where you work, so every working man and woman has a chance to have a better future. We will now work with newly-elected leaders and ensure they deliver on these important issues.”

SEIU members, together with our partners, knocked on over 3.6 million doors this election cycle and sent over 700,000 text messages. Over 13,000 members led our efforts, running GOTV efforts and building a long term program for political change.

By beginning early, with a field program in 62 House districts and a goal of reclaiming power by winning governorships and state legislative races in the Midwest and in other key states, SEIU members and Fight for $15 activists began engaging communities of color to inspire infrequent voters and connect with them on the issues. The elected officials who came through on the issues of higher wages, affordable healthcare, and the right to join a union were the ones who succeeded today.

Read more about how SEIU members helped mobilize infrequent voters across the country.