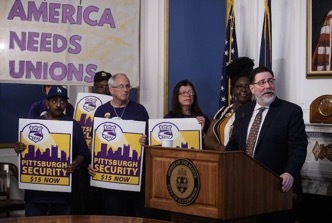 More than 1,100 Pittsburgh security officers are celebrating this week after reaching a new contract agreement that includes a pay increase that puts them on a path to $15 an hour with the city.

In addition to the wage increases of $2.45 over four years, the new contract also includes paid holidays and more paid leave days. These changes are significant, considering the security guards organized with 32BJ SEIU just four years ago when most of the officers were making less than $10 an hour.

For officers, like Toneka Harunna, this pay means an opportunity to pursue other goals.

“Now I have a chance to go back to school and do all the things I've always wanted to do,” said Harunna.