Refugees like me know the dangers of religious intolerance

Here's why I'm a Christian airport worker against the Muslim Ban 2.0

I’m about to become a teacher—against all odds.

You see, I didn’t get a regular education like most people. When I was seven years old, I was taken from my family’s home in the Southern part of Sudan, and sent out to a camp with thousands of other boys. We didn’t have school at all for the first year, and there were other years like that, too. 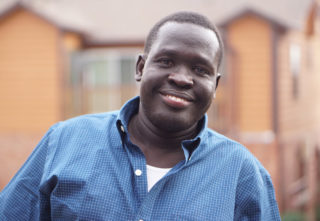 It’s not what my family would have chosen for me, but they didn’t have a choice.

This is how it happened:

All parents had to give up the oldest male child in the house. My dad was one of the elders, and he had to set a good example by giving me up. He would have been fined, I would still go, and he would have done time, too.

They sent me to Ethiopia, with many other thousands of kids – from 7 to 11, to 20 years old. Those who were oldest, they joined the army right away.

My cousin, Mayom, was older than me. He was 15, so he went to the army right away. He was killed in Jubba in 1992. I lost four family members in the war.

The whole first year, there was no school. We lost so many of us to diseases, to hunger. Life was misery.

That year, we didn’t even have blankets, let alone a shelter to live in.

Then the UNCR stepped in and brought building materials. We started living in makuti (huts). In the middle of ’88, they started teaching us under the trees. In ’89, they built big long huts for our school. That was when we were like, “YES! We’ve got a school!”

It wasn’t like a school here, with lights. We could only study during the day, then I’d go back and look for something to eat.

We started having competitions to get the highest marks. I was feeling good when I got a good grade.

When they announced the winners, there would be thousands of students in a big open area. (We called it the stadium, but it’s not a stadium.) They’d call out the top ten.

You can imagine how it felt to have your name called. Everyone would clap. So if you weren’t called, you’d better work your neck off next year.

The first year, I was number nine. There were no gifts that year.

The next year, in 1991, when they started giving school supplies as gifts, there were five of us with the same marks, tied for number four. So I only got a pencil. That was my first award! I remember it very, very well.

But the next year, the school in Ethiopia fell apart. I had earned a promotion to fourth grade, but they sent us all to Pochalla, a border town in South Sudan, due to political changes in Ethiopia. We stayed there for less than a year. After three months, there was a big anger, because there was no food. Then the UN started dropping food from planes, and life was good in October and November. But as we approached Christmas time, there was a fear of the fighting, and they evacuated us a month later.

We went to Narus, on the Kenya-Sudan border, then Loki, for a couple more months. Then Karkuma, in the Northern part of Kenya. That’s where life started coming back to normal. First we started living under the trees again, then from the trees to the huts. Same with school, we had classrooms built by the UNCR about a year later.

That’s where many of us graduated from 8th grade.

After that, a few of us were lucky enough to be sent to a government boarding school, where we just studied like Kenyans. The Jesuits paid my tuition.

Boarding school: it was quite a different life. It was like a dream come true. There was a building with lights, I could keep studying at night.

When I was studying biology, for example, I’d have the chapters, and then if there was anything I didn’t understand, I would go to the library and look up all the references on that subject.

And there was food to eat.

The hardest part, as a little boy in the camp, was taking care of myself. I had to think about what to eat, where to eat, and where’s it coming from?

When there were older people, they might cook. But they don’t cook if there is nothing.

So we always had to see if we could find food. I mostly ate mangoes and bananas and food from some other local trees. Some needed to be cooked, and some didn’t.

The fact that I grew up without my parents, I don’t think I’ll ever forget.

I went from angry, to trying to figure out how to take care of myself, to wondering if the UN would be there for us the next day.

Eventually, I was able to come as a refugee to the United States. I was 19 when I stepped to the U.S. land. I couldn’t even comprehend how good it was.

The night before I came here, my aunts, my brothers, and my whole extended family joined me in the camp. They cooked a lot of food, and we invited everybody. Everyone who came to the family table out in that field had something to eat. I still have the pictures.

I have fond memories of my family and my early years. I used to swim in the White Nile River. You know how big the River Nile is? I used to swim it twice. I could go across, turn around and come back without even getting out of the water. My nephew can do it now. He’s almost 11.

But my life is here now. I’m a supervisor at the airport. I supervise people from quite a number of nations. I respect them.

I’m looking forward to becoming a teacher—my lifelong dream—next year. Life hasn’t been friendly. But the one thing I could never do was to give up on my dream.