We need your voice to protect Medicaid

24 million Americans, 14 million of them on Medicaid, would lose their healthcare if Congress votes for the repeal bill.

As a registered nurse at Jackson Memorial Hospital in Miami, a Level 1 trauma and burn center and the largest public hospital in Florida, we treat some of the area’s sickest patients. But thanks to Medicaid and the Affordable Care Act, we’re seeing more patients in our community get preventive care and necessary follow-up with their healthcare practitioners to manage their chronic illnesses. Patients are more likely to have healthier outcomes and are less reliant on our emergency room as their only option for care.

Now that healthcare is at risk. Leaders in Congress have put forth a bill that would rip healthcare from 24 million Americans, 14 million of them on Medicaid. The bill would implement massive cuts and end Medicaid as we know it for those who can least afford it: children, seniors and people with disabilities.

All this would mean that premiums will rise, and millions of our families, patients, and consumers will spend more and get less care as insurance companies get richer. We will all bear the brunt of massive Medicaid cuts as extremists in Congress rush to push through their healthcare repeal bill, which could be passed in as few as 30 days. 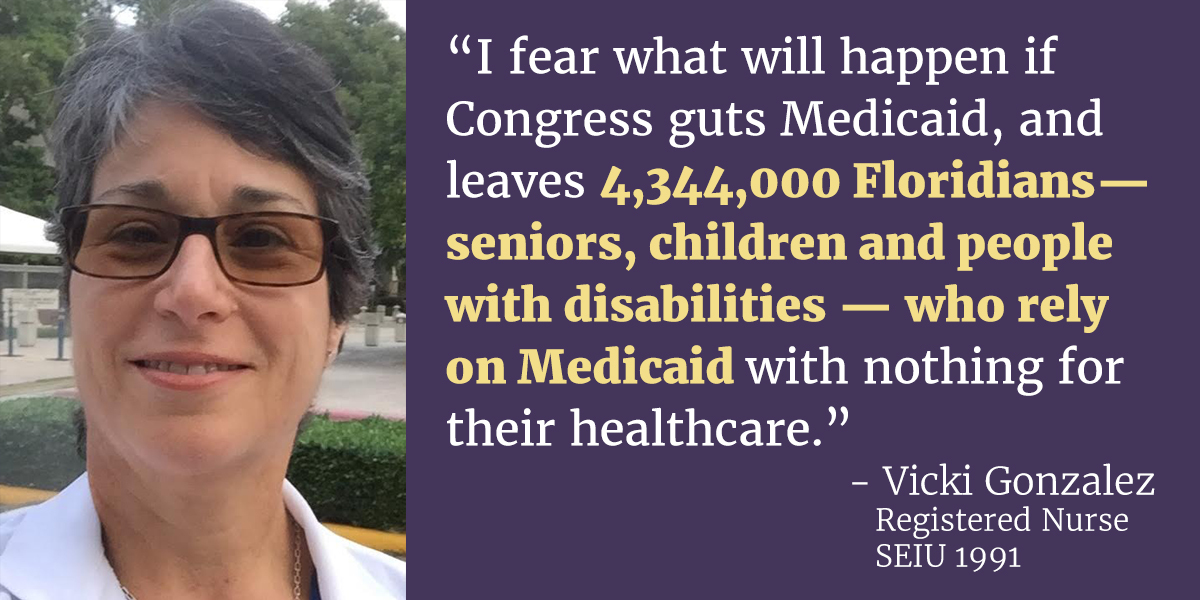 Over the last two months, I’ve walked in marches, participated in bus tours and rallies, and traveled to Washington, D.C. to demand a plan from members of Congress that will keep our patients and America covered. I have also joined thousands of fellow nurses, doctors and home care workers in calling members of Congress. Together, our actions have made a difference in delaying Congress’s plan to take healthcare from millions of working families--but we can’t stop now.

The House of Representative will be voting on this bill soon so we need everyone to call 866-426-2631 or 877-736-7831 for the Spanish language line. Urge them to vote no on the healthcare repeal bill and to keep Medicaid in place for America’s children, working families, seniors, and individuals with disabilities. Don’t forget to share your frustration with how the economic and political system is rigged against people who need healthcare the most but who are least able to afford it. We need care, not chaos.