Top 5 Reasons Why I am Getting out the Vote

For working families, this November's election is the most consequential of our lifetimes. Hillary Clinton has a vision for America that brings people together, raises wages for working families, and seeks justice for immigrants and black families. On the other hand, Donald Trump’s vision includes division and regression to some of the darkest days of our past. SEIU members are going to take to the streets for Hillary and champions for our causes up and down the ballot. My reasons why it’s critical for everyone to get involved: 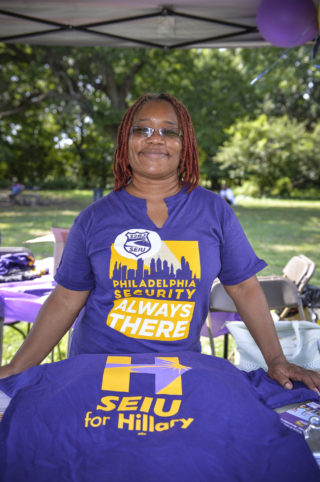 1.) Our children and grandchildren's futures are at stake. I care about raising the minimum wage, protecting health care and Social Security, and making sure future generations have clean water and air. These important issues are at stake on November 8th and I want to make sure my voice is heard. Hillary Clinton has been a leader on these causes. Not only has she spoken out in favor of the Fight for $15, she has a clear plan to raise the minimum wage, support unions and collective bargaining, fight wage theft, and encourage companies to share profits with their employees.

2.) I fight for the future of our country like I fight for my contract. Here in Philadelphia, our security union contract expires on September 30.  If I don’t organize with my co-workers and take to the streets, our employers will try to take away everything we have fought so hard for. The same thing is true in the election: if we don’t elect leaders who will fight for us, we will get elected officials who will take us backwards, not forwards.

3.) Politics matter, our votes matter. I have seen the difference it makes when politicians who actually care and stand with us get elected. Philly airport workers recently won a huge victory, thanks in part, to Gov. Wolf and Mayor Kenney who joined the fight for good jobs. And as my co-workers and I fight for a fair security union contract, we know that the support of elected officials will make a difference to our pocketbooks and our rights on the job. That’s why we are knocking doors for Hillary Clinton, and other candidates and issues, up and down the ballot that will win our fight for justice on all fronts and a better future for all families.

4.) Donald Trump and Pat Toomey would be a disaster for my state and the entire country. Trump and Toomey don’t care about working people. Trump says wages are “too high” and they both oppose raising the minimum wage. They can’t relate to what I go through every day. Hillary Clinton, and candidates for Senate and other offices like Katie McGinty, are in my corner, fighting for me. That’s why I am showing up to fight for them!

5.) It’s fun! I love seeing old friends and making new ones. I genuinely enjoy the experience. Not everyone can say that they spent their Saturday afternoon changing the world, but I can.

Through collective action, workers have changed the national debate around inequality and what families need to build a better future. Elected officials and candidates for office, including Hillary Clinton, are taking note and responding. We continue our work and on September 10th, I will be among the 10,000 SEIU members getting out the word. Will you?