Are you voting for retirement security?

The leaders we elect this fall may determine how we spend our retirement years.​

Watch out America. The leaders we elect this fall may determine how we spend our retirement years.

The next president will largely shape the future of Social Security. As with most issues, our presumptive presidential nominees have very different views on the cornerstone of our nation’s retirement system.

Democrat Hillary Clinton calls for protecting and expanding Social Security, which is greatly needed at a time when Social Security is the only portable, defined-benefit retirement plan that’s available to nearly all workers regardless of their income. 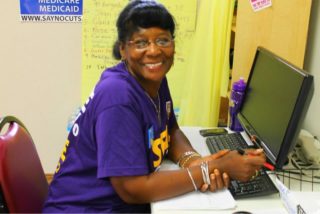 According to the Huffington Post, Trump opposes cutting Social Security. He also doesn’t believe advocating for program cuts is a wise campaign strategy.

In his book, The America We Deserve, Trump compared Social Security to a Ponzi scheme, called for raising the retirement age, and privatizing the program.

So how does he really feel about Social Security? And is Trump’s selection of Social Security opponent
Gov. Mike Pence (R-IN) as his running mate a reflection of his views? No one can say for sure.

However, we can be sure of this: We need leaders willing to put political ideology aside to ensure every working person in America has an opportunity to retire with dignity after a lifetime of hard work and playing by the rules. The fastest, most efficient and fairest way to improve retirement security is to strengthen Social Security by expanding the program—not cutting its benefits.

Concern about retirement insecurity is one of the reasons SEIU Local 1199 retiree Beverley Bell of Florida is making sure people get out to the polls this year.

“Donald Trump doesn’t care about Social Security because he doesn’t need it,” Bell says. “But if he got caught up in a Ponzi scheme and only had Social Security to fall back on, he would be grateful.”

Bell retired from the healthcare field in 2009 with both a pension and Social Security benefits.  Still, she often sees the impact of retirement insecurity on other residents of her Fort Myers area community.

“It’s hard especially in Florida. It’s so sad when you see a lot of older people who should have been retired a long time ago, but they’re just trying to keep working. It’s frightening,” she says.

Bell has volunteered at her local polling stations since 2013. While she hasn’t started volunteering for the Clinton campaign yet, she’s been getting the word out about HRC through her union.

“I know Hillary Clinton supports expanding Social Security,” Bell said. “I think she will make sure things are in place for the working people.”

It is just as important for voters to elect congressional leaders who support working families and Clinton in addressing America’s retirement insecurity. After all, every election counts this year.