We are rising to achieve racial justice

Young workers are coming together to fight back against racism

I attended my second SEIU International Convention and left inspired, again. We are starting our journey toward ending anti-Black racism. Some people may think this seems impossible because our countries were founded on the economic systems and political structures of slavery. Eradicating racism may seem like we are dreaming big but I know from experience everything starts with a dream.

Getting rid of racism won’t happen overnight but it can happen if we go on this journey together. We have to; we cannot afford to continue to let people divide us based on race. We know this division only works to hold our families, our communities and our country back. 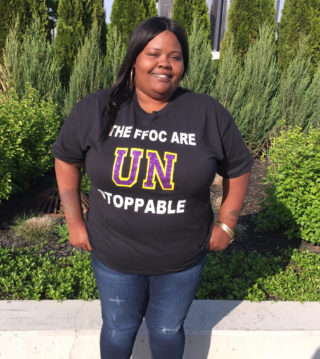 After the killings of Trayvon Martin and Mike Brown, members in our St. Louis local chapter were hurt. We knew we had to do something; these issues could not continue to go on unnoticed. We started the Future Fighters as a part of SEIU Rise and began organizing trainings in St. Louis and Chicago that enabled communities to work together toward solutions on the issues that we are all facing.

SEIU Rise is a development program for members between the ages of 18 and 35. Through this group, we have been able to work toward solutions to the complex issues that we face. Achieving racial justice is one of the top priorities of the young people in my local, and having a place that is encouraging and free of judgement empowers us to be part of building the movement.

We want to hold our elected officials accountable for removing policies that uphold structural racism. We want to see a world where everyone—no matter the color of their skin—can participate, prosper and reach our full potential.

People are winning because they are standing together for the kind of country they want. I was inspired to join the the Fight for $15 when I witnessed people risking their jobs and livelihoods to stand up for something they believed. We believe we deserved a living wage and we organized ourselves to get it. As a result, more than 10 million people are on a path to $15, and more than 18 million have won raises.