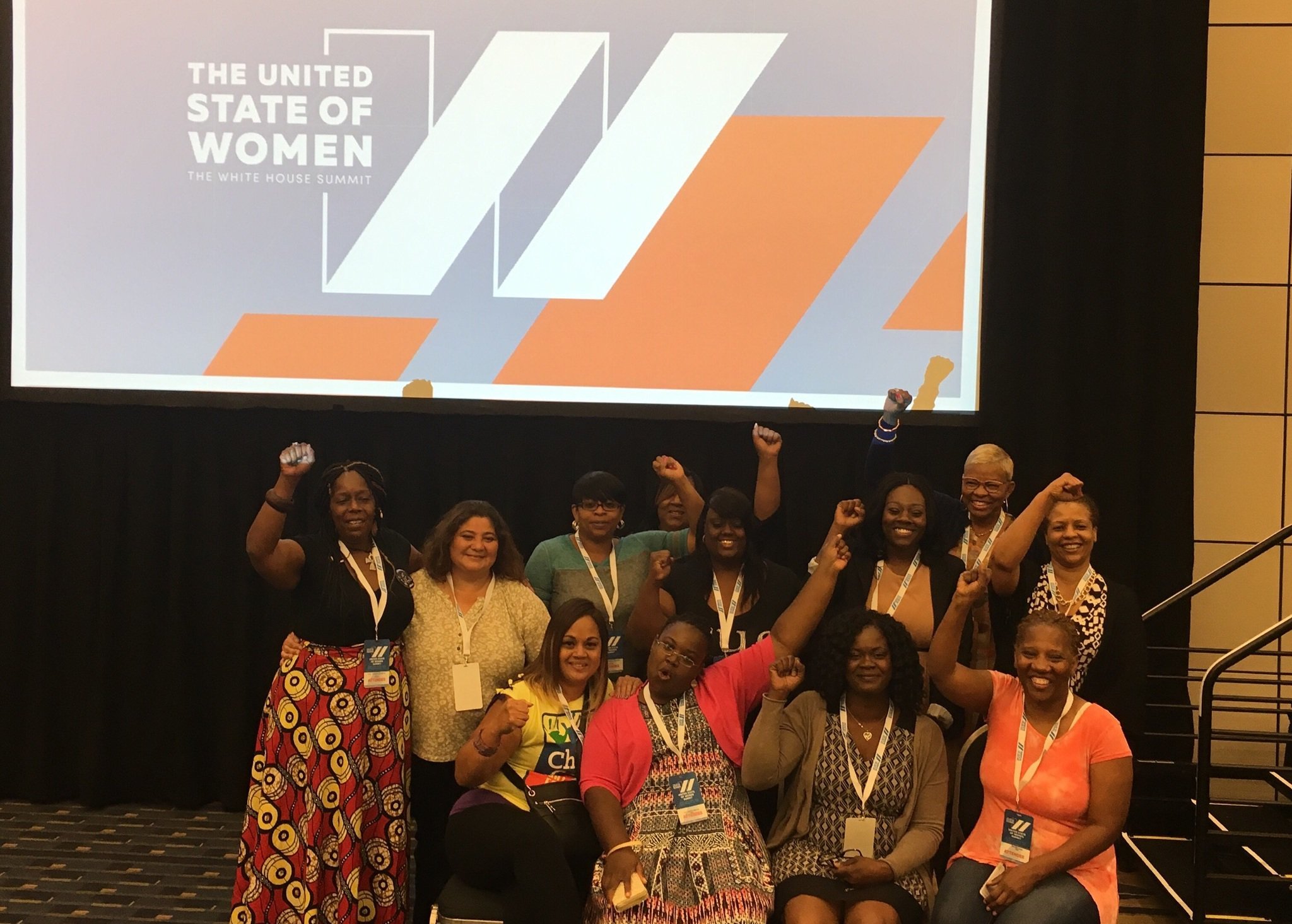 Some 90 SEIU members and other working women from the Fight for $15 movement traveled to Washington, D.C., this week, as the White House hosted “The United State of Women.” The summit celebrated what women have achieved in recent years in the United States—and what action can be taken in the near future on gender equality issues.

Two days of panel discussions and other events drew hundreds of women to share stories and propose solutions on a variety of issues ranging from access to quality, affordable child care to solving the home care crisis to raising pay in industries where women are prevalent.

·      During a panel titled “Investing in the Women Who Care for and Teach our Youngest Learners,” several women involved in the Child Care Fight for $15 movement took to the microphone to share their own experiences. North Carolina child care teacher Tolanda Barnette spoke about the need for providers to belong to unified organization because of the low pay that causes high turnover in the field. “I am a hardworking child care provider, and despite years of experience I don’t make enough to support my family. I am in this fight because we need $15 and a union,” Barnette said.

·      During a “Power of Women’s Voices” follow-up event hosted by the U.S. Labor Department, Philadelphia International Airport worker Onetha McKnight shared her story of fighting for better wages and working conditions for people working for airline contractors—and had the honor of introducing Secretary of Labor Tom Perez. “We know that justice is not handed to you on a silver platter. That's why you have to fight every step of the way," McKnight said in her speech.

·      Home care worker and leader in the Home Care Fight for $15 Betzaida Ventura, a member of 1199SEIU Massachusetts, joined SEIU International President Mary Kay Henry on a plenary panel, talking about the crisis in home care and the need for better wages and representation to keep workers in the field. “Ten thousand people turn 65 every day and the demand for home care is exploding. But there just aren't enough home care workers to meet the demand,” Ventura said.

·      Fast-food worker and Fight for $15 National Organizing Committee member Shymara Jones was chosen to introduce President Obama’s senior adviser and champion of home care workers and the Fight for $15 Valarie Jarrett. “The fast-food industry is the second largest employer in the world, yet these companies refuse to pay a livable wage to workers or allow us the right to form a union. And do you know who is most impacted by poverty wages? Women. We make up 73 percent of fast-food workers, and that’s not right. Low wages hurt our families and our communities and that is why it’s so important that we’re here today to talk about lifting up women’s voices,” Jones said.

These are just a few highlights from the incredible work SEIU members and activists led during the summit. Many of these brave women represent industries where the majority of workers are women, and by continuing to speak out on gender equality issues like they did this week, these women are making a powerful difference for all women workers in the United States.