Chris took it upon himself to get extra training, and wants to lift safety for all in security industry

Chris Rhudy has been a security officer for over a decade. He’s worked for four San Diego security contractors in that time, and takes the quality of his work very seriously. As a security professional, he’s taken it upon himself to get training in Healthcare Security, First Aid, CPR, and Emergency Response.

"Training standards are way too low in this industry,” he says, “Considering that we are the first line of defense for any emergency that happens." 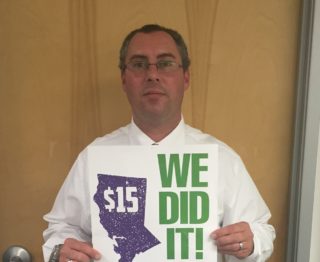 Chris currently works as a security officer for GMI Building Services, protecting a healthcare center that houses multiple organizations. "I am responsible for making sure the tenants are safe, but that sometimes puts my own health and safety in jeopardy."

In the healthcare center, Chris reports that he has cleaned up feces without proper training and equipment, and was recently stabbed with a needle while taking out the trash. Luckily he was wearing gloves that he purchased himself. When he went to the clinic, the doctor told him the glove had provided just enough protection to keep the needle from breaking the skin. Otherwise he would have been at risk.

The building itself has potential safety issues, too. He’s also been trapped behind entrance and exits that are not up to fire safety codes because of broken signage and crash bars. His employer doesn’t provide easy access to clean drinking water, or an adequate bathroom facility. He has to ask the tenants if he can use their facilities.

Now Chris has joined together with his co-workers to demand a union so that security officers' working conditions are safe and fair.

Chris and his co-workers have filed an OSHA complaint alleging unsafe working conditions.  Within days of filing the charge, Chris reports that GMI disciplined him for not following the chain of command in internal reporting procedure. It is against the law for an Employer to retaliate against an employee for exercising his or right to file an OSHA complaint. "They thought they could silence me,” Chris says, “But I'm going to keep fighting."

Chris and his co-workers have also filed an Unfair Labor Practice charge claiming company policies restrict officers' rights to join together in a union.

"My co-workers and I are fighting to form our union because we want more training and education for security officers,” he says. “We also want safe working conditions."

Chris has also been involved in San Diego's Economic Justice Coalition of San Diegans coming together to raise the minimum wage. After successfully working with elected officials to raise the min wage in California, Chris and his co-workers are taking the fight to the ballot box to bring their city’s local minimum wage even higher.

He’s also clear on the need for security officers to have a sustainable organization of their own. “Even with all our success on the minimum wage,” he says, “We still need a union because we need to raise wages and working conditions for all security officers."