Disrupting the economy of insecurity

Service workers, who were among the first to see their jobs contracted out, are now facing impossible decisions. Average annual pay for blue-collar contracted workers is just $19,900. This is less than the median annual rent in Santa Clara County ($21,444), and makes it all but impossible for families looking to move to San Jose, where the average asking rent for a 2-bedroom unit is more than $2,800 a month ($33,756 for the year). 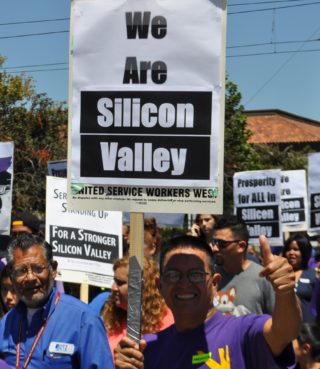 Even when white collar workers are included, more than 22 percent of people doing contracted work in Silicon Valley live in households with multiple unrelated families. Still others, like security officer Dan Gretz, live with relatives:

“I became a security officer in 1998, and built up my hourly pay to $24 an hour. But a new security firm took over my building and dropped my pay to $14 overnight,” Dan says. “I cut back on expenses as much as I could, but it wasn’t enough. I had to refinance my car twice. I added debt to credit cards. I just finished going through bankruptcy, and my fiancée and I can’t afford to live together anymore. We are both living with family members.”

That’s why Silicon Valley security officers like Dan are standing up—alongside janitors, shuttle bus drivers, and food service workers—to build an economy that works for everyone, not just the wealthy few. This is even more important because 58 percent of blue collar contracted workers in the Valley are black or Latino, compared to only 10 percent of direct tech employees.

Both Apple and Google have already announced plans to phase out an irresponsible security contractor in favor of stable, full-time jobs with benefits for the officers who protect their campuses. In May, Facebook announced a new policy for its contractors, including a $15 minimum wage and other benefits.

All people who contribute to tech's success -- from subcontracted service workers to contracted software developers – must have good, stable jobs that allow them to reinvest in Silicon Valley's economy.

You can see the report from Working Partnerships USA, or read more from the Washington Post and The Guardian.