Immigrant and home care worker shines at the White House 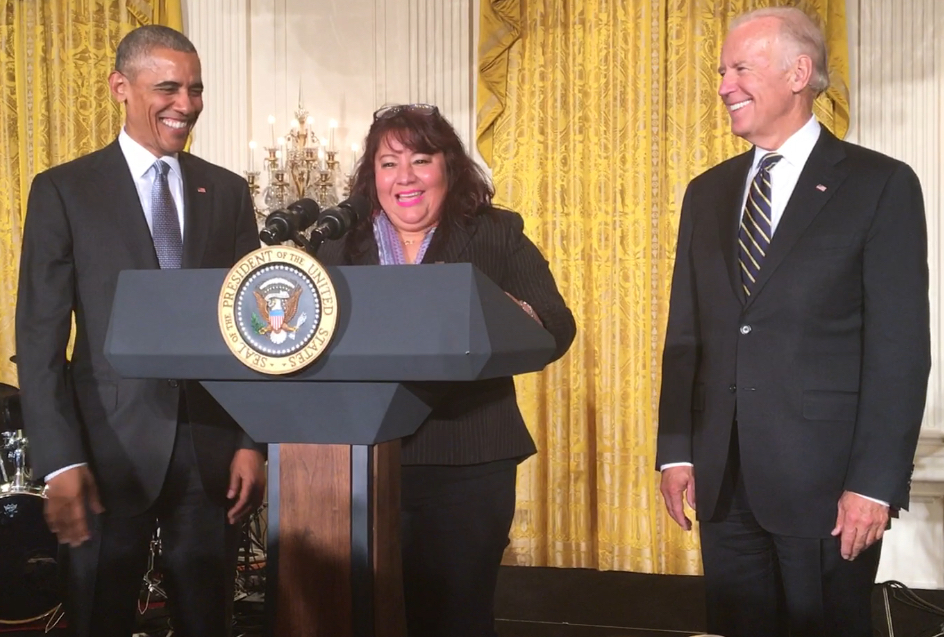 When home care worker Roxana Giron introduced President Barack Obama during his last Hispanic Heritage Month celebration at the White House, she used the opportunity to call for better jobs for all workers like herself. Giron, a Salvadoran immigrant who fled the civil war in 1988, is a mother and a leader in the Home Care Fight for $15 movement in Las Vegas.

Giron reminded those attending the Oct. 12 event of how home care workers care for older Americans and people with disabilities and help them live with dignity and independence. Yet, workers such as she currently earn low wages that prevent them from taking care of their own families. Giron has never earned more than $10 an hour. That’s why she is calling for fair wages for all home care workers and the right to have a voice on the job.

This year is especially important for home care workers and the people they provide care. As voters decide between two candidates for president with very different visions for America, home care workers could see a country where they are continued to be paid low wages or one where all workers make wages on which they can raise their families.

“I want every home care worker to have a good job, with fair wages and benefits,” she said. “We work so hard to take care of other people, but we can’t take care of our own families. We are fighting for a better life.”

Giron gives all she has to her family and her community. This mother of four cares for three veterans, as well as two of her own daughters with several developmental disabilities. Her workday extends from 5 a.m. to 11 p.m.

Her story touches on many elements of the immigrant experience. She fled the violence of her homeland—war-torn El Salvador—looking for safety and a chance to build a better future in the United States; just like many immigrant families fleeing Central America in recent years.

She was able to achieve legal status thanks to a U-visa, a vital lifeline that encourages victims of violence to come forward with their story and cooperate with law enforcement authorities without fear of being sent back. After enduring years of domestic abuse, Giron was able to become a legal permanent resident.

Introducing President Obama at the Hispanic Heritage Month celebration in his final year of office was a privilege for Giron, however, she fears that next year, under a Trump presidency, no such celebration will take place. Trump’s threats to build a wall and tear families apart is yet another reason she hopes Hillary Clinton is elected. Clinton has stated time and time again that she will make immigration reform with a path to citizenship a priority within her first 100 days as president.

Giron is a home care worker because she loves it. Her calling is helping other people, including those we hold in the highest regard—our veterans.

In an election cycle when the Republican presidential candidate is stoking false fears of people who have lost their home due to war and conflict, Giron's story reminds us of the contributions individuals can make to their new home and how much she loves America.

“Like millions of immigrants across the United States, I work hard to contribute to my community,” she said, while standing next to President Obama and Vice President Joe Biden.

The White House named this wonderful moment the "Photo of the day":

Today. Roxana Giron hugs President Obama prior their walking out together to a reception for Hispanic Heritage Month. Roxana introduced the President at the event.
A photo posted by Pete Souza (@petesouza) on Oct 12, 2016 at 6:20pm PDT